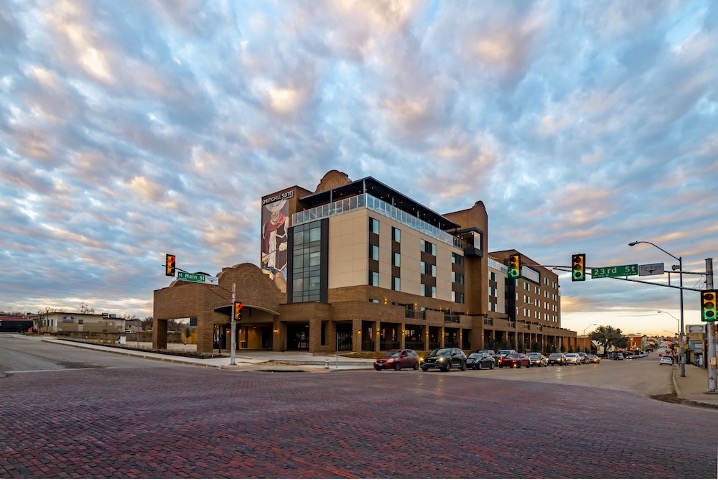 The construction marketplace has changed dramatically over the past few years, with wood being the framing choice for multi-family and other commercial construction mainly due to cost. The shortage and rising cost of lumber coupled with the impact of global climate change have combined to drive owners, developers and contractors not only search for material alternatives, but also question the ongoing viability and cost effectiveness of wood framing. This includes strongly considering the advantages of concrete masonry in their designs as a cost-effective alternative. In addition to the structural benefits, studies show for the first time that the overall and upfront construction costs for building with masonry are now lower than wood.

The battle against global climate change

NASA predicts that the rising numbers of heat waves, heavy downpours, wildfires and severe storms will increasingly compromise the infrastructure, agriculture, fisheries and ecosystems of nearly every region throughout the United States. Over the past year alone, more than 800 wildfires scorched 6 million acres of Midwestern U.S. land. Researchers at Risk Management Solutions (RMS), a U.S.-based risk management company, estimated that the fires in California, Oregon, Washington and Colorado alone cost insurers $7 billion to $13 billion in 2020. This is on top of the research of the National Interagency Fire Center (NIFC), which estimated that wildfires, heat waves, and droughts suffered throughout the U.S. from 2017 to early 2018 produced $12.33 billion in insured losses.

When it comes to the choice between wood or concrete masonry framing it’s important to remember the simple, “material” facts: wood rots and burns, while concrete masonry units (CMUs) are among the strongest materials available in today’s building marketplace. With a Class A rating, the highest flame spread classification available within the industry, concrete masonry has repeatedly proven its ability to keep fires contained, while withstanding extremely high temperatures and flames longer than other building materials. This includes keeping fires contained to the room of origin 93% of the time and withstanding the direct exposure to fire for up to 4 hours.

As a result, concrete buildings consumed by fire have a 99% survival rate. In comparison, other studies have revealed that heavy timber only kept fires contained to the room of origin 47% of the time.

These findings were also supported by another independent study, which found “materials like concrete masonry, precast concrete, and cast-in-place concrete have many other advantages beyond their inherent fire performance including resistance to mold growth, resistance to damage from vandalism, and minimal damage caused by water and fire in the event of a fire in the building. In many cases, with this type of construction the damage outside of the fire compartment is minimal. This provides for reduced cleanup costs and quicker reoccupation of the structure.”

According to the National Oceanic & Atmospheric Administration (NOAA), “Flooding is an increasing issue; compared to the beginning of the 20th century, there are both stronger and more frequent abnormally heavy precipitation events across most of the United States.”  A study by the National Centers for Environmental Information even found that the top five storm-related disasters in 2018 and 2019 combined to cause more than $75 billion in U.S. damages.

As a result, the value of CMUs in water and moisture management is being evaluated by more and more developers, builders and architects/designers. With water damage being a major culprit in structural deterioration, leading manufacturers are developing patented water repellant technologies into the masonry and mortar of their CMUs. Bonded into the capillary pores of the cured material, the moisture is then ushered through the block and out of the system’s flashing and weep holes to secure the underlying structure from the subsequent water issues that can accompany intense rain and water conditions. Masonry wall systems and ventilated facades are also being designed to better shed water on building exteriors.

Other environmental benefits of masonry include the inherent ability to endure the large uplift and overturning forces of tornadoes, hurricanes and other high-wind events. Given their relatively high mass, structures designed with CMUs have even been shown to withstand winds up to 250 mph and resist the penetration of 15 lbs. projectiles traveling at 100 mph – an advantage for areas like the Midwest and coastal areas that are currently experiencing a continuous series of wild weather events.

With a major impact on the construction framing industry right down to deck building, the coronavirus pandemic was filled with unexpected consequences. Along with either delaying or shuttering construction projects nationwide, the industry was rocked by the spiking costs and shortage of building supplies that stalled the entire supply channel.

Unfortunately, many lumber suppliers and millworks simply stopped producing materials in anticipation of reduced demand that never materialized. A problem that proved doubly troublesome for the American lumber industry, which was already suffering from the rash of wildfires that consumed forests across the American Northwest. And with U.S. reliance on Canada for 25% of its lumber, higher tariffs, closed borders and higher transportation costs further complicated availability.

In fact, the U.S. Chamber of Commerce Commercial Construction Index (CCI) found earlier this year that more than 30% of the contractors surveyed experienced a shortage of  structural lumber during the 4th quarter of 2020. Published May 2021, a separate study from the NAHB revealed that 94% of those surveyed suffering from some form of a lumber shortage, while 47% described the shortage as “severe.”

As for pricing, the National Association of Home Builders (NAHB) estimated that the cost of lumber increased more than 300% over the past year alone, while the Associated General Contractors of America reported a far more modest 85.7% jump in lumber prices between April 2020 and 2021.

As a result, concrete masonry has remained remarkably available this year, with masonry producer Oldcastle APG reporting time frames of 8 – 12 weeks based on receiving a signed order. This is in direct contrast to the availability of framing lumber and the need for builders to endure the extremely long wait times for their current jobs.

Several large market carriers have reduced the builder’s risk insurance rates for the multi-residential structures constructed with concrete masonry and precast floors/ceilings as opposed to wood frames as reported by several independent research studies. For example, in Dallas a combined builder’s risk and general liability insurance policy was 40% less for buildings designed with resilient concrete masonry. These savings were compounded even more when considered that the property insurance was 2.5 to 3 times higher for structures using wood instead of concrete masonry. In other major cities like Charlotte and Atlanta, the cost advantages were even greater and included a whopping 50% reduction in the combined builders risk and general liability insurance policies of buildings that used resilient concrete masonry rather than wood.

Forbes also sounded alarm when it found that “renewal increases have jumped 20% year-over-year, according to Q3 2020 data from Marsh’s Global Insurance Market Index, a measure of global commercial insurance premium pricing.” Even the rates for clean accounts were expected to rise from the high single digits to the 15% range per the Risk Placement Service (RPS) 2021 U.S. Property Market Outlook.

This has prompted contractors, property owners and developers to examine the insurance cost benefits of building with CMUs. In some areas, insurers have even offered a 5 percent discount to the property owners in fire-prone areas who participate in the National Fire Protection Association’s Firewise program, which was introduced to help people avert the catastrophic effects of wildfires.

Concrete masonry provides a host of benefits that include durability, thermal performance, fire protection, and cost-efficiency. However, with the multitude of profile sizes and aesthetic choices, the modeling of new projects can be tricky given the limitations of today’s leading software packages.

For example, platforms like Revit typically focus on steel or monolithic wall structures and are not fully equipped to manage the abundance of data across masonry projects. This places a burden on the designer to hand-draw and maintain the 2D content for patterns, sections, details and specifications.

To close the gap between modeling and automation, Masonry iQ, a new Revit plug-in, is one example of design software that reduces much of the time-consuming manual modeling work, while also delivering design flexibility, modeling accuracy and photo-realistic rendering capabilities.

An entirely new way to approach masonry design, Masonry IQ focuses on getting designs construction-ready earlier in the process, allowing architects to focus on creative design and eliminate the tedium of modeling with a cloud-based system.

Helping to level the playing field with wood frame designs, Systems like Masonry IQ have even created greater cost- and time-savings efficiencies by removing a great deal of the uncertainty from the building process. This includes completing the CMU project parameters from budgeting and scheduling to color matching and construction with far greater alacrity, speed and precision.

The ability to reduce costs, while withstanding the elements and unforeseen dilemmas and market conditions, remains a high priority for the industry. This is due to most indicator models predicting more intense and frequent catastrophic events, ranging from hurricanes and flooding to wildfires and mudslides. On top of that, few predicted the industry wide cost and supply problems caused by the coronavirus pandemic – and can the rise in variants cause another round of shutdowns?

But there are steps that the building industry can take now while society and science work towards a better and more secure future. The use of concrete masonry is among the many solutions. Not only is it enduring and cost-effective, masonry can provide rich, textured aesthetics—modern or old world –that become timeless. As reported by one recent study, even a “minimal increase in construction cost can also help pay for itself over the life of the structure.”

Have the latest news, information and resources for Architects, Engineers, and Contractors from the Southeastern Concrete Masonry Association sent directly to your inbox.